For quite a few years I have planned on making this animated advent calendar to countdown to Christmas. But for the past few years I have had too much on to be able to do it justice. However this year I finally decided to take on this challenge, and boy was it one!

When first coming up with ideas I knew I wanted to use a range of Animation techniques to create the films for each advent door opening. So I decided on aiming for 5 different animations in 5 different styles that I shall be exploring in each of these ‘Making Of’ Posts: Stop Motion, Pixilation, Digitally Drawn, Hand Drawn and Cutout/Other Experimental Techniques.

For the actual film ideas themselves I began by listing all the possible symbols of Christmas I could think of; from Angels to Ice Skating and Snow to Turkey Dinner, I wrote out this long list of about 50 different things and then started to pair up ideas that went together well into 25. One for each door [including Christmas Day]. I then divided them into the 5 animation styles and started writing out story concepts for each short.

Under the category of Stop Motion I originally had ‘Carrots, Cookies + Fireplace’ where we see a crackling fire going. ‘Present’ with a present being unwrapped. ‘Penguin and Polar Bear + Snow Globe’ which would have a handmade snow globe shot in closeup. ‘Candycanes, Nutcracker, Train on Track + Sweets’ having a train on a track manned by a nutcracker and carrying sweets. And finally ‘Reindeer + Sleigh’ on a rooftop with a sleigh full of presents and a reindeer munching on a carrot.

When it came to creating, animation and editing these films from September through to December I found the time constraints difficult so had to cut the ‘Reindeer + Sleigh’ film and actually made two new films from re-worked old footage..

Door Fourteen used An Animated Christmas Card film that I made for a competition brief at Staffordshire University during my second year on the Stop Motion Animation and Puppet Making course 3 years ago. I edited down the film so it had the Christmas card parts wishing a Merry Christmas and a Happy New Year [which I made a change from ‘2016’ to ‘2019’] so as to remove the part from the Animation Department. [Music: Lifting Dreams by Aakash Gandhi from YouTube Audio Library] 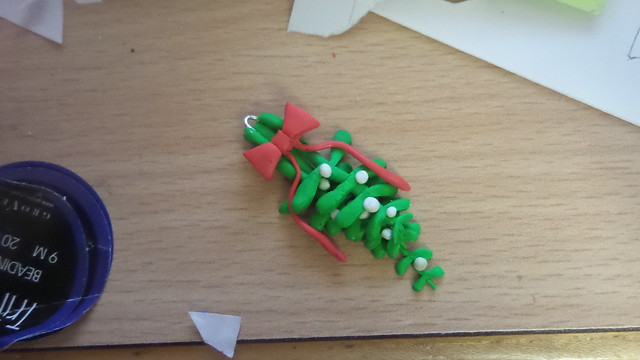 Door Twenty Two was the other old footage piece using the film An Animated Merry Christmas that I animated during my first holiday break 4 years ago in the first year of my degree course. For more on the project you can find this old blog post about it here. I tried to enhance some of the footage to improve the quality. Overall these were really interesting films to create and look back on after having finished my degree course and to see how much I have improved over the years. [Music: Silent Night Instrumental by Jingle Punks from YouTube Audio Library]

Door One: I made a little solid craft of a brick fireplace with a saucer of cookies and carrots on the side at about 3cm high. I then used little pieces of orange clay to animate flames flickering and moving. All this needed was the crackling fire sound [by dobroide from Freesound] and the short was complete – giving a great feel of warmth that you certainly need in the cold of Winter. [Music: White River by Aakash Gandhi from YouTube Audio Library]

Door Seven, making a little box from jewellery box I had, which I covered in paper. Creating the lid from cut cardboard that was shaped to the box and also covered in paper. This was when I had decided to animate the unwrapping of this box only and not also the unboxing as I thought the concept of ripping of the wrapping off was far more “Christmassy” than seeing what the gift necessarily was and leaves that element of wonder and questioning in the run up to Christmas. So I wrapped the box and tied it up with a bow ready to animate. On the table which I animated from I though the covering of another style of wrapping paper would be a nice element to add, and I think this works well in the final film. [Music: Lifting Dreams by Aakash Gandhi from YouTube Audio Library] 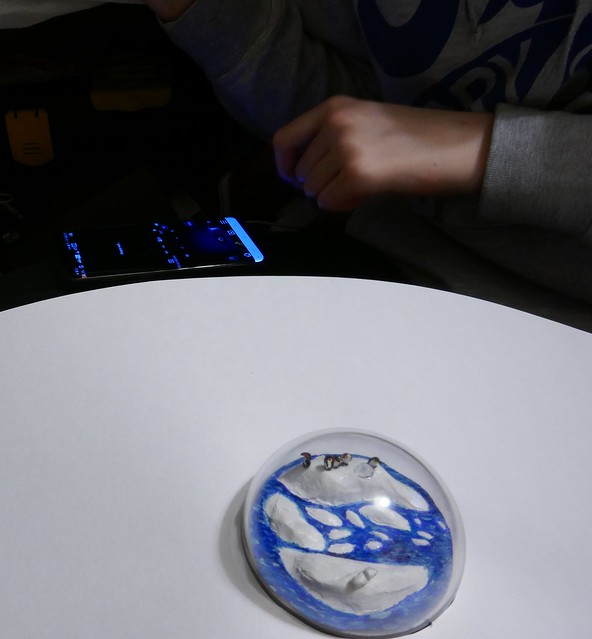 You can see here in the Plastic Clear Dome, Tricked to look more Snow Globe Shaped.
This also shows the great phone connection you can use to control the Panasonic DMC-TZ100, making it so you don’t have to risk wobbling the camera between shots by touch taking photos or have to spend extra on a device to do this by remote.

Door Twelve shows a handmade piece animated in a turnaround. I knew when I came up with this idea I needed a glass dome of some sort that I could use to make look like a snow globe – and after searching many stores in my local town I found some sweet little domes in the art shop we have [Pullingers] that were sold separately with these wooden trees you could paint and place together as a Christmas decoration. I then crafted small parts together in Sculpey to create an ice landscape with their snowy creatures on the scale in the dome. The greatest challenge was to get a realistic shape to such a small size but I think once it was all painted up they looked rather effective. Then to animate it was quite difficult to keep each shot in the exact spot with the short time window I had to capture it in – one day I hope to create a fab looping gif of this piece. But for now this spinning animation tells my story well. [Music: Silent Night (Instrumental Jazz) by E’s Jammy Jams from YouTube Audio Library]

Finally we have Door Twenty Four, the original idea concept changed in the end to save on time I cut down on one element there and had an un-manned train without it’s nutcracker figure. I filled out the shapes of the ‘toy train’ in tin foil initially to bulk out the form and save on the more expensive baking clay material. TOP TIP MOMENT if you have any dry FIMO baking clay that keep crumbling apart a lot [no matter how much you try to knead it with your hands] add a little water to it and then work in your hands and it should become more waxy and slowly mouldable [and therefore usable] again! Although do beware the pigment will come out on whatever it touches! I also crafted sweets and little gift parts the train carries out of FIMO. The back carrying them being folded together out of card. For the track this was animated along I thought a bold graphic lined design would be most eye catching as it mixed two dimensions. Animating was tricky with some slight unwanted movements of the set coming through that I would have liked to re-shoot, but with the time constraints of such a quick turnaround project such as this it is difficult to do re-shoots. Perhaps another piece to re-try and expand upon in the future? [Music: Oh Little Town of Bethlehem Instrumental by E’s Jammy Jams from YouTube Audio Library]

Here you have the first section of ‘Making Of’ elements for my Animated Advent Calendar. Looking back on this project if I were to do it all over I would have started much earlier with my full time job on the side. However I am still very happy with all the work I have managed to produce in these short films. Come back next week to learn all about the Pixilation Elements of Animated Advent Calendar!

One response to “Animated Advent Calendar Making Of: Stop Motion”