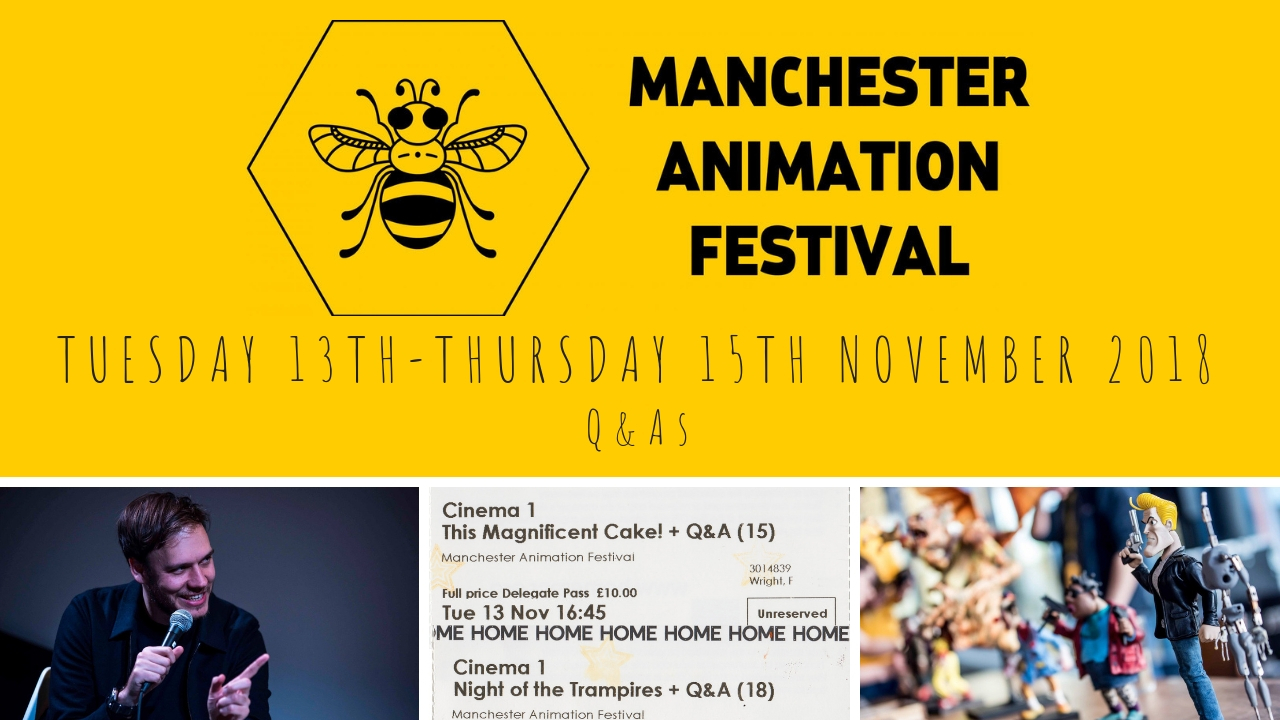 I am so glad that I have managed to visit the Manchester Animation Festival again this year after being unable to go last year. This is a fantastic festival showcasing and celebrating all things animation with panels, Q&A’s and screenings over the three days that can certainly get your creative juices flowing. Over the next few weeks I shall be going over the highlights of each of the events I got the chance to see in November, so don’t forget to come back for more!

For this Q&A session we were joined by Marc James Roels, One of the Directors (Emma De Swaef being the other) on the beautiful stop motion animated medium film Ce Magnifique Gâteau! or This Magnificent Cake! Released this year to the film festival circuit.

One of the first points we touched on was the question of the length the film is, as previously stated in my Review of this film it is not quite a feature film length but not exactly a short film either. Therefore as Roels stated it is the rather unusual category of a medium length film. The directors had never set out for the film to be this length but they made sure to stay true to the story they were envisioning. The production of the film was about 3 or 4 years in story development and around 2 years everything else as wanted to make sure had the story right before working further on the project.

When they were brainstorming ideas for a new film they realised their previous short Oh Whillie was all middle aged white men and so wondered what other character would be like in a similar style of film. Found inspiration in old storybooks, these vivid pictures of old life and came up with miserable people in unusual situations.

Inspired by some real life family dramas, such as the storyline of stolen money by a relative. The directors also re-write constantly, with Marc doing the research in the story while Emma begins on the making side of the project. As he works on the story and she builds the roles are rather separate with their collaboration and I think that is what makes the partnership so successful as each of their passions shine through into the end product.

Needle felting wasn’t a set decision, both directors had studied different subjects from stop motion. Emma wanted to incorporate animation into documentaries. Slowly building more animation in films and skills. She started in Mackinnon & Saunders and learned from there and then worked back choosing to use simpler style of materials such as balsa wood and wire to create their puppets rather than full armatures. Everything you see is made – seeing what they are and incorporate different meanings too. You don’t want to lose the illusion of the materials in a larger size.

With sound they tried out a lot of pre-existing music, usually classical and impressionistic music. Look at the visuals and then play music. And based on the feel of a scene they would then choose their piece if music for the scene. This is what was so interesting to learn in this Q&A session was the level of gut feeling they followed which creating this film and the trial and error with editing before story and after. As Marc says it is much more like live action then you might of thought, especially when you know what work goes into creating such a stop motion film. Overall this was a fascinating look into this unique film that I am glad I got to be a part of.

Written and Directed by Mike Mort this 80’s Action Stop Motion Gore Comedy goes back to the Chuck Steel character of his previous short, seeing him get up to even more trouble fighting Trampires. With a review coming soon this is a little write up piece on the Q&A session we had with Director Mike after getting a very exciting premiere screening at Manchester Animation Festival.

So this film came about after the Short Raging Balls of Steel Justice where we see this stereotypical “action man” lone wolf cop take on crime. When making this short Mike found a group of techniques that he wanted to try out and more stories he wanted to follow with this iconic Chuck Steel character and so decided to try make it into a feature film.

Mike ran into quite a few challenges throughout the process of creating this film, firstly as studios are cautious of independent films and so have nit found the distribution backing yet. This means the voices we in the audience heard at the screening may change as they may need more stars to get more of a distribution and people to the film.
There was also some difficulty with the piece not being ‘PC’ but there shouldn’t be a need to change so much, it is a stereotype and a slapstick kind of comedy that makes a joke about how inappropriate it is, not condoning the things themselves. This brought up a real debate in today society and how things have developed and changed over the years.. But had to change some parts as the time effected them – a reference to Trump for example before he was president.

To make this film they used armatured puppets made with hand crafted expressions in clay, getting these vivid stylistic expressions from the characters that really make the action within the film pop and so enjoyable. One of the most memorable of moments with the puppets being when the Trampires melt away which Mike said they created by slowly heating up puppets with solid skulls and meltable clay with painted on acrylic, so the acrylic looked like skin and clay guts and blood, so imaginative!

Overall this Q&A session brought up just how inventive and wonderful this feature film is and how we may all hope for more inventive new films such as these in the future. Look out for the Review of the film itself coming Sunday!

So this is the second segment on the Wonderful Manchester Animation Festival, you can find the next blog post about ‘Commissioned Films’ here!

For those of you who don’t know about MerMay it is this rather popular Art Challenge on Instagram with over 308k posts this year! It was started by Tom Bancroft a Disney Animator and Character Designer with different words for each day to prompt the artwork.   14 ♦ AdriftFor today’s prompt I hand stitched this […]

For those of you who don’t know about MerMay it is this rather popular Art Challenge on Instagram with 168k posts in the past 13 days! It was started by Tom Bancroft a Disney Animator and Character Designer with different words for each day to prompt the artwork. 7 ◊ TranquilI’ve always loved that Riviera poster […]

Hi Everyone! So I know it has been a while since I last posted on here 375 days in fact! It has been a hell of a year full of lots of changes, work and projects and this is the main reason my blogging has taken a slip. But I hope to change this and […]