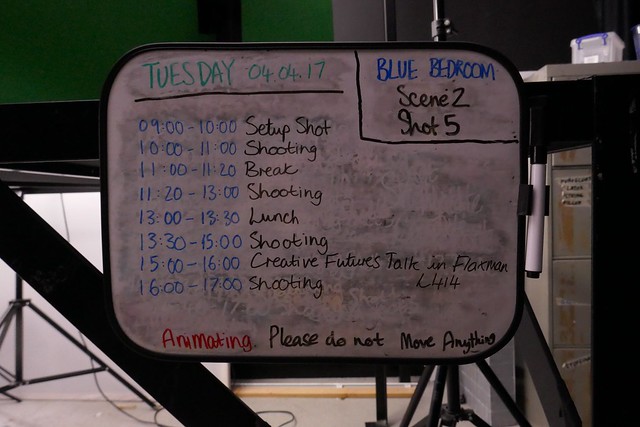 Animation was a very important stage of this project as it is the production and the medium of film I am creating. But with the schedule mapping out the plan for each day to know that I had enough time for each day.  However to make it clear to everyone in studios and myself each day what my plan was without having to keep re-editing this digital schedule I made up a whiteboard one for in the studio.

I also used this notebook for each scene to make sure I could remember what I needed to do with each scene in editing as I animated.

I started with the Blue Park Set as this was the biggest chunk of on-screen time I would have with one of the sets. I started in order with the first (FMP_BP1) Scene. I ended up filming this shot with greenscreen as she walks down the pathway. This saves me a lot of time with composition as I don’t have a long enough set to really show this as is. I then set up the first half of my blue park set (with the yellow crack to the wall and the puddle) defusing light off the white ceiling to fill the set with a basic fill of light. I then set up the other lights to show a direction of sunlight consistently throughout the scene.

The most challenging part I feel was the walk cycles as they would normally be and with this scene in the animatic a lot of the shots were large whole body walk cycles. However this was too difficult for a whole 10second (240frames) shot to be of this meticulous animation work. So I split this up into various different styles of shot to show this within the scene. Such as a closeup to the feet walking and a point of view shot as kneels to the puddle.  Overall this made the shot more interesting and draws in the audience more.

I then moved onto Scene Two (FMP_2P1) which were the scenes moving onto the other half of the Blue Park Set (with the red crack in the wall and tree) These had the cat walking along the wall leading to the other hole in the wall and down the tree to the girl. These were much longer shots and had a lot greater movements.

The most successful shot of Scene Three (FMP_3P1) was that of the pan following the cat along the wall and down to the tree as the camera and the cat move really smoothly and uniquely to create a fantastic shot.

The final of these scenes were when Carlina comes back and scales the wall. (FMP_4P1) This was rather challenging as the weight of the puppet scaling the tree was rather heavy with my homemade rigs so I worked with more objects and stands to try and even out the weight. The tree also is of course lightweight and so this created another level of complexity. However it worked out in creating the shot, we shall have to see how the rig removal will work out in Editing.

I then put together each of the coloured land sets to make up the Aerial Scene. (FMP_1A1) This was pre-planned how they would fit together in design but to make the right animation shot was rather difficult as the height of the rig with the set and puppet on and the height I could get the camera on it’s rig were rather close. Making the shot a lot closer to the puppet then I had hoped for. However it still was far enough that you could see each of the coloured lands which is what I needed with this scene.

The Red Garden was the next set I went on to use as the lighting setup was already in mind with continuity from Aerial Scene. Starting with Scene 2 so as to continue from the aerieal scene with Carlina picking flowers and plants. (FMP_2R1) This is the first time I used the Red Puppet James that I made, it was very different with to animate than Carlina being mostly that the armatures came from different packs and therefore had very different feels. They also consisted of very different weights.

James watering his plants is the second scene of this set that I animated (FMP_1R1) It was a long shot and rather difficult with the creation of waterflow from the can. But I feel the use of plastic worked rather well except on the side angle at the end and so this would need more work in editing as well as removing the tape I used to attach the plastic to the can.

And finally I worked with the Blue Bedroom set. (FMP_1B1) Firstly being the scenes of blue where she is drawing out the outline of this cat and we see how she is stuck in this one colour medium and her frustration grows. I created the illusion of her drawing by printing out a series of the cat outline as individual frames of paper that I could switch out on set for each frame ‘drawing’. This was a really effective method.

The second scene with this set was my final scene for the film where we see the room transformed with more colour, she is using the red flowers turned to paints and creating much more varied artwork. I animated a series of 6 5second (120frames) shots of Carlina colouring up a new drawing of the cat. This shows a great change in the story and finally ends with this shot seeing her eyes coloured.

These were the final parts that I animated, various different shots that I wanted to add into the other scenes and such ‘add ons’ such as the flowers that are in the windowsill of the Bedroom Scenes. These were quick and simpler shots to create than previous ones.