A New Semester, A Final Year

It is odd to think that this year is my final one on my Stop Motion Animation and Puppet Making course at Staffordshire University. It has been years in the making and yet feels like it has crept up on me in no time at all..

This Semester began with an intense weekly tasked project: Three Weeks in October where each week we got a new task to undertake, from which we must make a new animation for each. 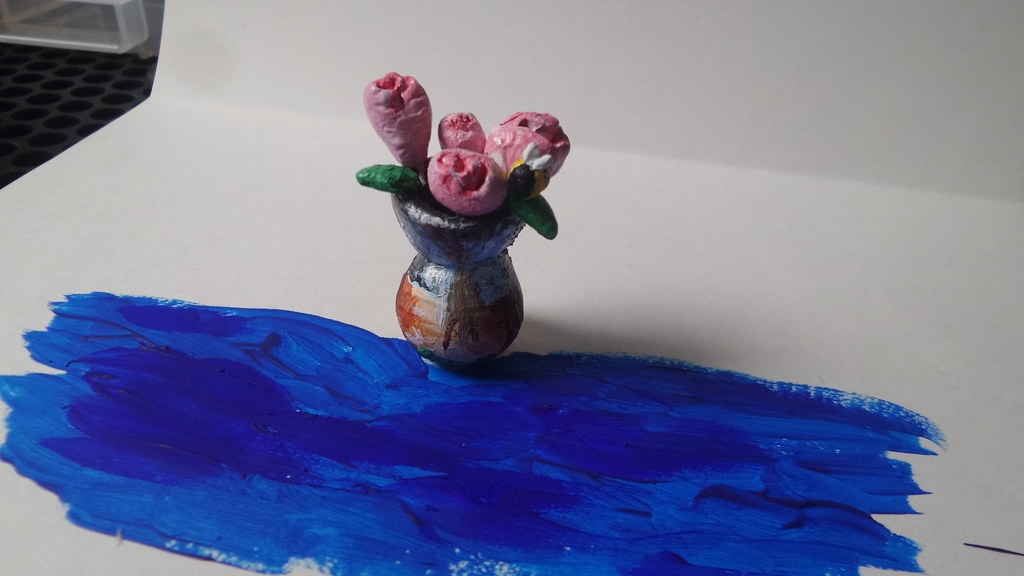 Week One: The Power of 9:
To create an animation showing 9 specific positions using the Animation Principles, in an artistic movement style. In my case being Impressionism. It began with research into the art movement itself, looking at what sort of style in entails and the artists that created them. First looking at the book The Art of Impressionism by Callen Anthea which included a great many illustrations of the art movement, with some great details on them each.
From these I looked into the work of Monet and Morisot which many will think of when they hear of Impressionism. I realised at this point I definitely wanted to focus on the nature paintings as this was easier in which to work with. And I finally came across Moss Roses in a Vase by Édouard Manet, a beautiful painting of an old plain vase of light pink flowers. This inspired my Bee Flying piece around this vase.
For this art movement painting each frame would be most ideal, however the continuity of such a piece in this time scale would not realistically work out. And so I decided to make a 3D model and paint this to look as though the painting itself.
And so, crafting together this small piece, and then painting them up brightly like the flowers in the impressionist painting. From which I began animating, using a wire rig for the flying Bee I found it to be a rather difficult task at time, Mostly to get the right sort of movements without knocking anything I shouldn’t within the shot.
Editing of course mostly consisted of rig removal, all of which was done well and within the time scale needed, however some of the magic of the lighting was somehow lost during this process and so I shall have to make sure this does not happen once more within any future endeavours. 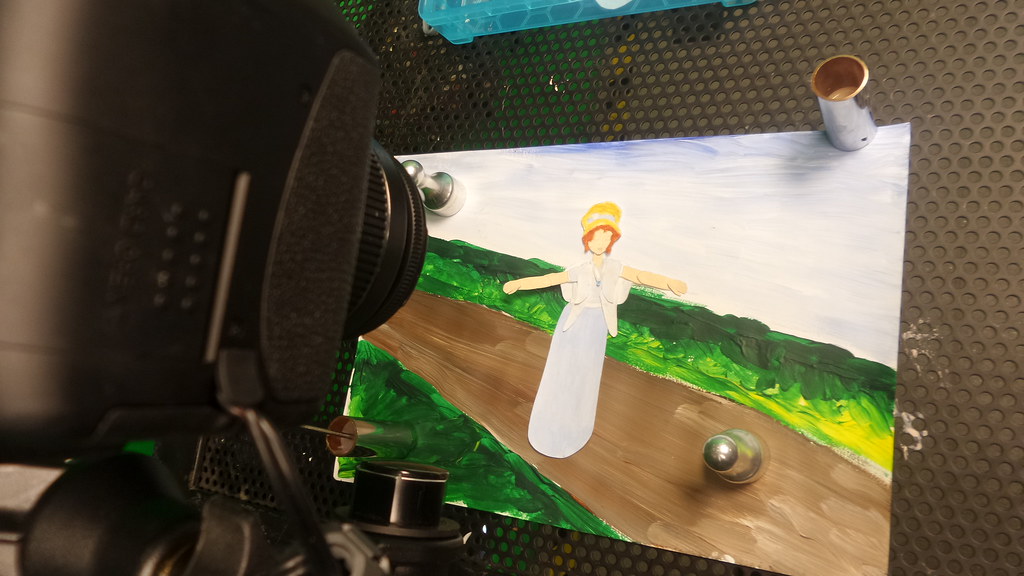 Week Two: Onomatopoeia:
A word that suggests the sound it describes, using a collection of 6 such words to create a 30sec animation with representation of these words shown through text, picture and sound in a specific film genre style is the weekly task this time. My given film genre was that of Period Drama and so I began by looking into the famous Period Drama film Sense and Sensibility from 1995 directed by Ang Lee.
Specifically I researched into the details: Clothing – delicate simple dresses, bonnets when outside, Shawls. Hair – Tied up styles, curls framing the face. Locations – Grand houses, cottages, parks. And I thought the most common occurrence was that of walks through the parks and so I decided to have a female character do just that during my animation.
And so with this in mind I painted up a park background and made a cutout puppet in the style of the female characters researched. I also made up a background for another cutout puppet bird scene. All of which to simplify the animation process.
And so for each word I animated: Squelch – Footsteps as woman walks through park. Quiver – Woman shakes and moves shawl over shoulders. Chirp – Bird on branch tweeting. Groan – Stretching woman, arm out sideways. Jingle – Playing with necklace. Scratch – Hand scratch to hair. I had assistance from Carolann Dalziel to animate the text factor of the film, making each word look as it sounds.
And once edited all together the last segment to be added was that of sound recordings for each word represented. This is always the hardest task I find to have the sound created as this is not a strongest skill of my own and with a week to do the task was difficult to pass on for assistance. 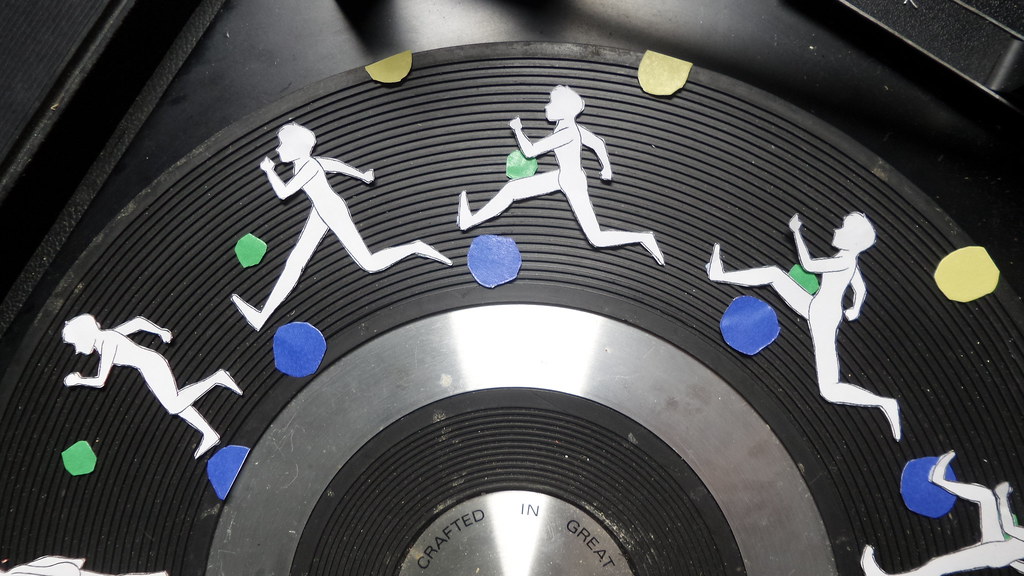 Week Three: Sting:
The final week task was to put together a sting for the Animation Department at Staffordshire University in a pair, to a specific piece of music. I worked with Sorena Tamburrini and we decided on this record player piece using frames of a man running, from which the department colours burst out of his body before these arrows take over and are replaced with the Animation @ Staffordshire University Logo. I wanted it to be something unique and eye catching and so this experimental animation/film style will work really well at that and being therefore memorable.
Sorena worked on the animation itself, having this male figure walking and then turn into a run and the department arrows taking over the screen. These worked out really effectively and smoothly animated in a set of frames.
From which I printed and carefully cut to be then stuck to the record player to record on that through film. I also cut out a series of different circles in the department colours to have from the bursting animation part.
All in all the filming process was rather simple, catching a series of different rates to see which would look best when edited together. However the set up of each shot took a great deal of time and concentration and so was the main focus of my process. And when I put the whole film together I felt it lacked something as it didn’t quite seem to start right.
This was how I then cam to add in this ‘intro’ film sequence of me setting up the record player itself within the department, Having the famous animators lightbox as a backdrop. This made the film look far greater and really stand out well on it’s own as a sting for the Department.